Atlanta: Training ground of Outkast, boaster of the 10th largest GDP in the nation,1 early bastion of hipster coffee shops in the South, and eccentric, concrete star of the eponymous FX show made by Donald Glover. Also: where I joined a Code for America brigade for the first time.

I won’t go into the reasons I went to that city, but I will share what I learned.

In 2014, and still to this day, the brigade was under the fine co-leadership of Luigi Ray-Montanez and other wonderful folks, and it hosted dozens of people, high energy, and free pizza.2 On my first night, I joined a project in partnership with the the city and the Atlanta Community Food Bank: we wanted to map food deserts using business records from the city.

That project could be the foundation for more innovation, such as overlaying data from Google or other sources to better understand the areas, or building a canvassing tool to empower folks to add data about those areas, including what fresh food was available at businesses or locations not traditionally categorized as grocery stores (e.g. convenience stores or street vendors). Maybe we could even add food price or spending data to the map, hopefully with findings that could convince major grocery chains that moving into one of these food deserts would not only better serve those communities but be profitable.

The first thing I learned was what a food desert is. The Centers for Disease Control and Prevention (CDC), which, coincidentally, is headquartered in Atlanta, defines food deserts thus:

Food deserts are areas that lack access to affordable fruits, vegetables, whole grains, low-fat milk, and other foods that make up the full range of a healthy diet.3

The second thing I learned was what a food bank is. It’s not a place where people in need go to get food; it’s the distributor of food to those places. The Atlanta Community Food Bank works with over 600 non-profits in the region to serve over 755,000 people in need.

The third thing I learned was how the city was involved. A staff member had volunteered to spend an evening every week with us to share data and answer questions. I’m guessing the city already had some sort of relationship with the food bank (probably financial), but, as I’ve witnessed in other cities since then, it appeared to take the Code for Atlanta group to convene them on this extracurricular, data-centered project. I learned that city staff really do care about the city, enough so to volunteer time outside of work to try new ways of doing things, and I also learned about the city’s status quo of sharing data: 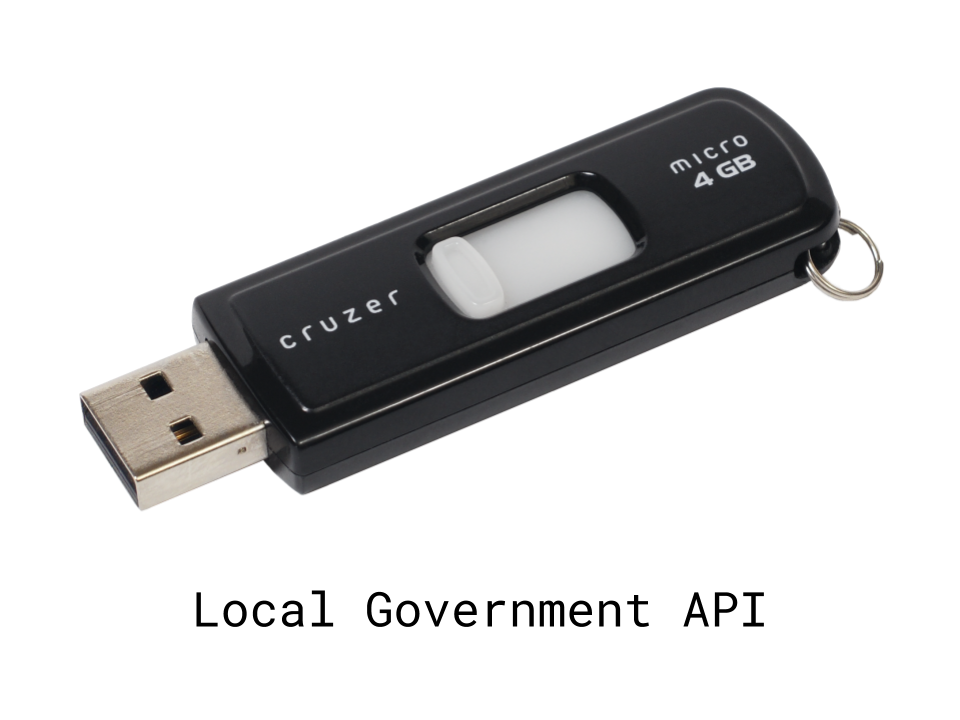 But more on the technology in a later post. In fact, it should tell you something that the first things I learned on my first brigade project weren’t really about technology at all. My first real lesson in civic hacking was that I still had a lot to learn about my community and how it worked.

I didn’t know anything about food systems in my own community before that night, and I didn’t know about the infrastructure (government, nonprofit, or otherwise) that supported it. I also started to realize how much I still didn’t know.

Now I wonder, how would I have learned these new things if I hadn’t shown up that weeknight after work? One could argue that the best infrastructure is infrastructure you don’t ever think about: you only think about roads when you drive over a pothole. There may be some truth to the value of unobtrusive, practically invisible public infrastructure, but we also need infrastructure that people are aware of, understand the fundamental mechanics of, and are engaged in. How can we make basic information about our local governments and our communities as common knowledge as the day your trash gets picked up?

In my next post, I’ll dive into a recent experience in my NYC neighborhood and explore some ideas for improving community education. Until then, I’d love to hear about your first introduction to your city. How did you start to learn how your community works? Tweet at me.

1 According to this report.
2 Full disclosure: one of the reasons I got into tech at all was the abundance of free food at meetups. It feels weird to say that given the topic of this post.
3 Quoted from their website. Want to learn more about access to food in your area? Check out the Food Atlas. I also want to note here that I've been learning more about the debate around the term "food desert", versus other terms like "food apartheid" which more explicitly convey the intentionality of systematic food scarcity, but this post isn't the best place to explore that.
Share